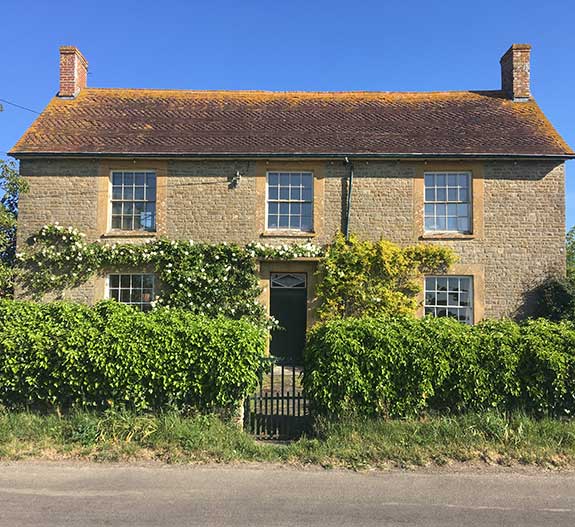 Research in the appropriate sources can often lead not only to a clearer picture of life in the house, but sometimes to precise information about the original construction and alterations of the building.

The people who lived in the houses are always interesting and the best records for finding out about these people, whether they be worthy and upright citizens, or knaves and scoundrels, will be those of the Chancery court, where conversations between family members are sometimes given verbatim, occasionally with reference to individual rooms such as ‘the chamber above the hall’.

Chancery records will help to bring the former owners and inhabitants of the house to life.

Susan Moore specialises in manor houses and farmhouses although the history of a medieval house in the heart of the city of Wells was an enjoyable, and successful, aberration. Projects have included identifying the construction date of a large 17th century manor house in Oxfordshire, the history of the owners and occupiers of the earlier houses on the site of a Dorset public school (which involved smuggling!), and the history of a 16th century farmhouse in Kent which identified the date of renovation in the 1720s.

The complainant John Breedon was very much in beer and fuddled when he came into the pantry which the deponent noticed by his staggering and by his talk, and he could scarcely go out of the pantry when he was in it, therefore he believes he was very much distempered with the liquor or fuddled when the settlement was sealed and therefore could not understand the endorsement.

He did not perceive his master John Breedon of Bear Court to be disguised in drink. He knows all this to be true as he was then butler to John Beare of Bear Court and carried the liquor as it was called for. He thinks the complainant John Breedon took horse for Reading that night. 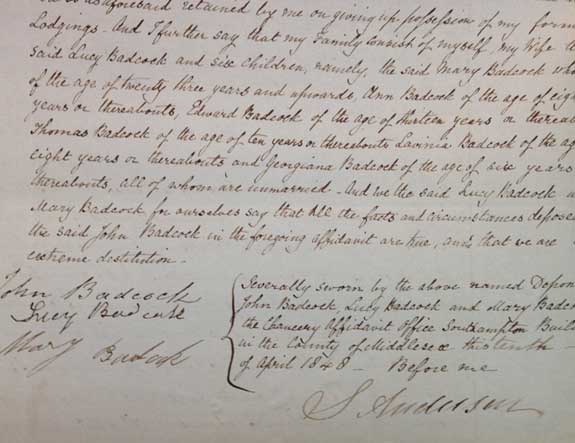 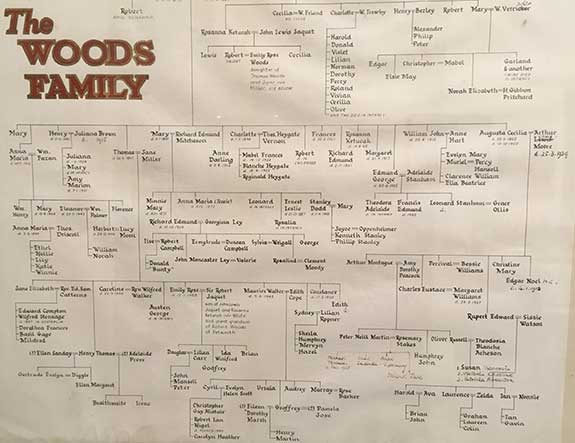 To a certain extent you can, but you will be missing a vast array of potentially useful sources held in local and national archives.

Susan Moore can help with these, and will search deeds, maps, court cases and other records that can help distinguish between different members of the family, or just to find out more about the lives of your ancestors.

It is in family history that Chancery records are really essential as they can recite several generations of a family with cases starting with the words ‘my great grandfather’. Not only will each generation be described, but absolute clarity will be given between ‘my grandfather John’, ‘my uncle John’ and ‘my brother John’.

Many manorial histories have been compiled by Susan Moore, usually for those who have recently become a Lord of the Manor, and wish to know more about their particular manor.

Maps of course are a fundamental part of any village or manor history.

Chancery cases can also include signatures, birth dates, marriage dates, ages, or as in the example image.

Apart from the ‘run of the mill’ sources referred to above, a recent project involved detailed searches of the East India Company records to identify pieces of furniture brought back from India to London that are still in the family. 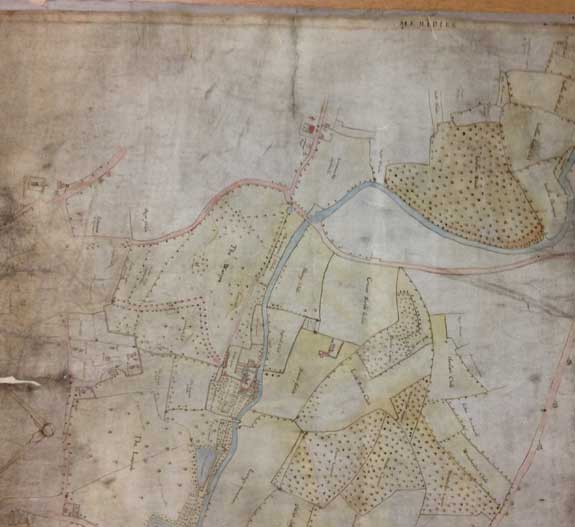 This can be huge undertaking, but Susan Moore can help with identifying and reading the deeds, court records, early tax records, so that gradually a complete history can be created, often far more informative and detailed than anything there may be in print.

A number of projects have involved research in the records of the Crown Estate, which are complicated for the novice, but have now become something of a speciality for Susan, such as the 17th century Parliamentary Surveys of all Crown lands.

Many manorial histories have been compiled by Susan Moore, usually for those who have recently become a Lord of the Manor, and wish to know more about their particular manor.

Maps of course are a fundamental part of any village or manor history. 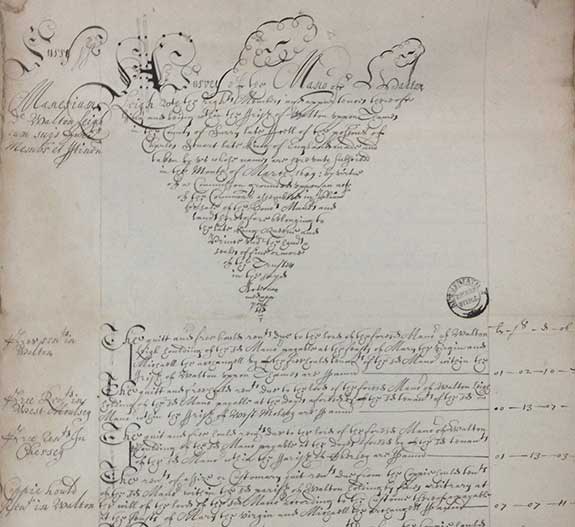 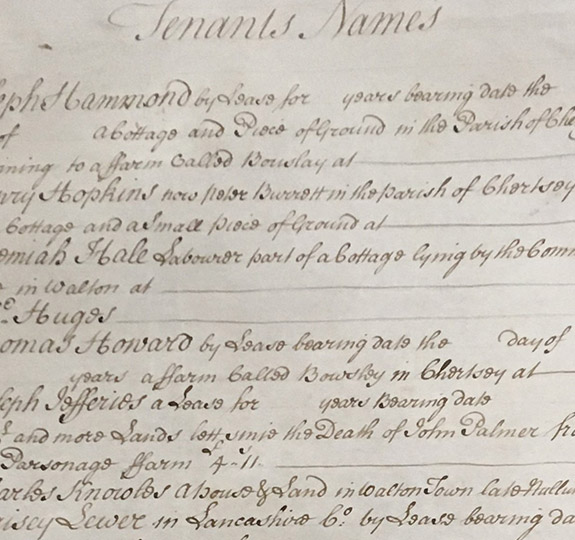 Research into the origins of a firm of silversmiths in Sheffield resulted in a history of the town’s early industrial revolution.

In contrast to urban history, rural history cannot ignore Chancery records, with their recitation of field names in deeds that have long since been lost, along with detailed schedules of the land values including details of the landowners and their tenants.

Recently projects have included using Chancery records to identify an 18th century author’s involvement with the publication of a newspaper, and detailed research in the Court of Wards and Liveries for evidence of the late medieval descent of a Welsh barony. These research requests are usually very specialised, and take full advantage of Susan’s familiarity with the records held in the National Archives for the late medieval and early modern periods.

These include locating relevant documents and maps to clarify a boundary dispute, tracing the current and past ownership of lordships of the manor and carrying out research prior to the registration of manorial rights. Recent research has involved the ownership of mining rights in Wales following a Chancery dispute in the 1860s.

It must be made absolutely clear that any research undertaken or documents provided are purely from a historical perspective, and do not in any way constitute a legal opinion.

I must congratulate you on your systematic approach to your research and presentation of the records and report findings, and also the speed and promptness with which you produced your Report.

Susan, thank you for the excellent transcript of the will. I've been staring at the will for years wondering what it all meant - and now everything is crystal clear. Many thanks.

Good morning, thank you very much for your note and all the documents attached. There is so much interesting reading we have learnt quite a bit more about our maternal grand-parents, I know my mother will also be very interested.

Contact Susan outlining your request, with full details of the information you already have and what you hope to find

All work is charged on a time basis, and most research tend to extend to several days, in some cases weeks

In two parts: full research notes, and a detailed explanation of what has been found, with image of relevant document

Explore More Get In Touch